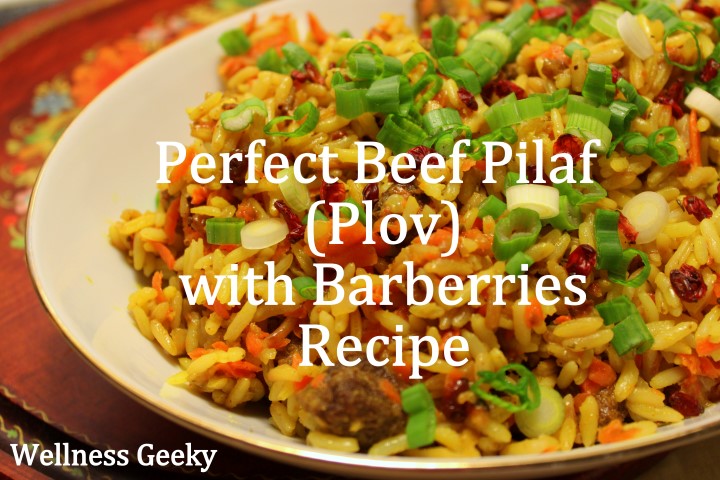 Beef pilaf is an excellent dish for everyday and special occasions. It doesn’t lose its tastiness after reheating, so you can make a large casserole and enjoy a couple of days.

Even the leanest beef parts will end up very tender when used in this recipe.

This dish is also a big winner for serving at parties to guests from different cultural backgrounds as it has a very balanced taste, but is still something unusual and intriguing for most Americans.

Let's start with a little bit of history (I’m a NERDY green mom after all…).

English term pilaf came from Modern Greek pilaf, which was subsequently borrowed from Turkish pilav. Pilaf in its variations has spread to numerous countries of the world. But one thing is always the same made with rice.

It’s believed that everything started in India, as the first mention of "pulao" or "paleo" (meat and rice cooked together) was in Mahabharata. Most likely this dish became well known in Europe with the help of Alexander the Great and his soldiers, who first tried it after the conquest of Marakanda (modern Samarkand).

The first who documented the recipe of pilaf was a Persian scholar Avicenna. Tajiks and Uzbeks believe that Avicenna is the “father” of Uzbek plov or polow/polo (how it was called in Persia).

N.b. Tips on how to cook beef for pilaf, so it's super tender I got from one of my Persian friends.

During the years of the USSR beef rice pilaf or rice plov (as it was known in post-soviet countries) spread through all Soviet republics from the Caucasus region and is very popular until now. I found a carnivore diet article that focuses on meat-based food like beef. It has healthy tips to follow. You may see their homepage here.

N.b. For you not to be confused about what is 4 large carrots or 3 large onions, aim to use equal parts by volume of the main ingredients, such as beef, carrots, onions, and rice.

Beef pilaf makes a good pair with pickles and sauerkraut, as well as dry red wines such as Merlot or Cabernet-Sauvignon.

Have you ever tried to make a rice pilaf recipe before, share your experience below.